Which crew is the BEST in FS City?

Gather your crew member and compete with each other!  will open on

*As Crew Tournament update, current Crew Match and Co-op match will be removed

When will the Crew Tournament Open?

1) Crew Tournament will open on the Saturday at 8:00 pm (region time) of the last week of Crew League

2) Top 8 crews during crew league will be selected as a tournament participant at 00:00 (region time)

1) Crew Tournament is BEST OF ONE game. Your crew has to put all your ability to proceed the tournament

3) As Crew Tournament starts, top 3 members (based on crew score) of the crew will be selected as

4) During Crew Tournament, if one crew does not show up for the match or meet the requirement

3 participants, the  crew will automatically win the game

5) YOU CANNOT SEE THE OPPONENTS’ CHARACTERS for the match. So communicate with your squad member

8) Crew Tournament will last until the winner crew is selected

1) If you are one of the squad members, you will be directed to  to decide your participation

2) In squad page, you can decide whether or not you participate in the Crew Tournament

3) If any squad member is missing or refuse to participate,  will be formed with other top 3 members

have the next highest score and show the will to

4) You will have 5 Minutes to form a squad. When time remaining less than 10 seconds, you cannot change

5) If you fail to form a squad within a time limit, your crew will be considered as lost 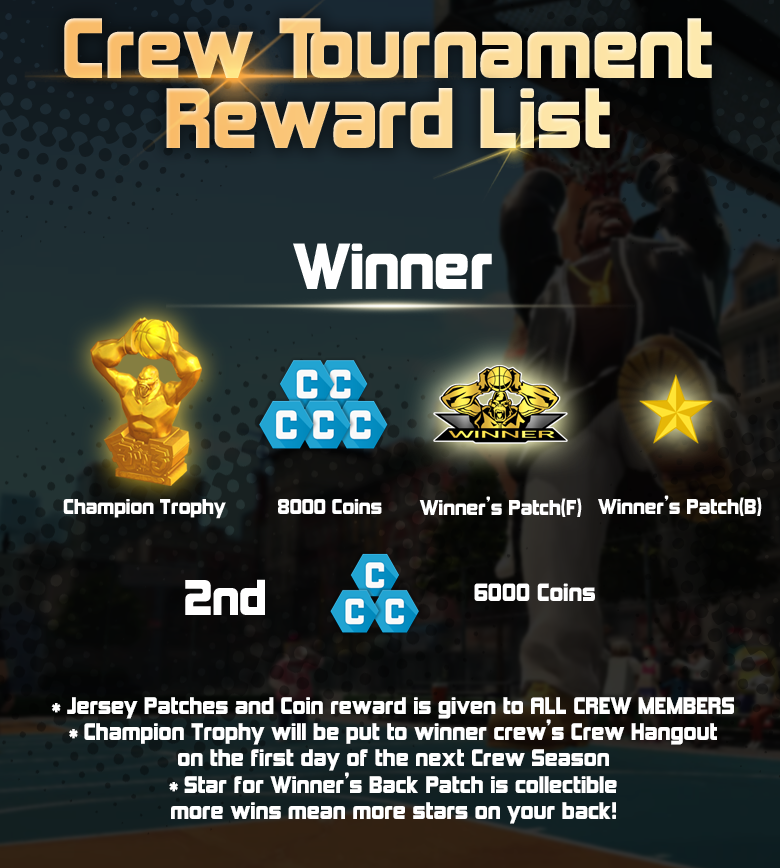 Be the winner crew and get Crew Tournament Winner Prize!

The winner crew will get SPECIAL TROPHY to celebrate your Victory! You can decorate trophy in your

* Jersey Patches and Coin reward is given to ALL CREW MEMBERS.

* Champion Trophy will be added inside the winner's Crew Hangout on the first day of the next Crew Season.

Join free and get free missions to get Mega Badges! Get your Mega Level up and earn free rewards.

This time with Mega exclusive Outfit and that scary moves everyone knows.

** Bundle has Badges that would make you kick start from Mega lvl. 11

**Please be reminded that you can only purchase one of these above DLC.

Here are the things you should know about Mega pass!

-       Mega Level is exclusive to Mega Pass event and is not relevant to User Level.

-       Level up and experience the joy of unlocking exciting rewards.

-       You can either complete missions and get your share of Badges or purchase the badges. 1 badge costs 1 Point.

-       Seasonal Missions don’t reset till the Season is over.

-       Upon complete a mission, your acquired badges raise your Mega Level automatically. 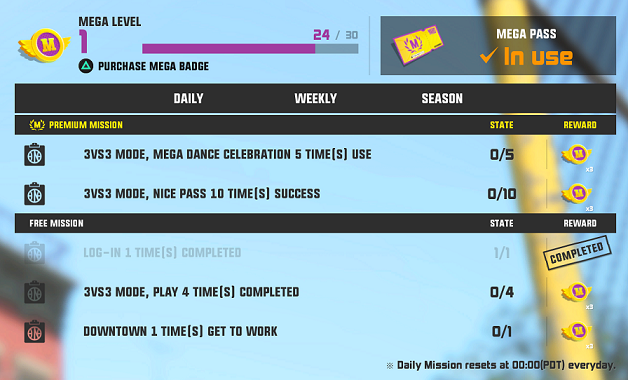 Platinum Ability Card Packs for all basic Characters are on sale. Get one for only 33 Points!

Freestyle Gold card is on Discount for a weeks only.

Don’t miss out on this rare chance! ​

No need to wait for your extra points! Check how much you have purchased right away in the event page. Extra Points Event becomes more simple and direct!​

Event Period: 01/15 - 01/21 23:59 PST
Followings are the details of the event workflow:
1.) During the event period, you can find Extra Points Event event page in the event tab
2.) You can receive your extra point in this page and your extra point will be automatically sent to your message box
3.) As soon as your purchased points DLC arrives to your Message box, the point will be accumulated
4.) To receive extra points, you MUST fulfill the required accumulated points
5.) You can see your current accumulated points on the event page

**Please be reminded that with some Point DLC with bonus points included, the purchase record will be counted as follows;